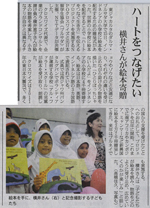 On March 18, 2014 “The daily Jakarta Shimbun”, a newspaper of Jakarta reported the picture book donation ceremony at the University Darma Persada in East Jakarta.

“Connecting our hearts together”

Ms. Yokoi (Nonprofit Organization XYZ, Japan) donated her picture book “You are the only one, but never a lonely one” to Indonesia.

On May 15th 2014, a ceremony to donate picture books “You are the only one, but never a lonely one” was held at the University Darma Persada in East Jakarta. The story of the book is written in 3 languages – Japanese, English and Indonesian, and 40,000 copies are donated to elementary schools in Indonesia with support by NTT DATA. At the ceremony, students of Al Falah special primary school read aloud the donated picture books.

Nonprofit Organization XYZ (cross wise) started this project to donate the book to children of many countries to gratitude for the support from all over the world for the Great East Japan Earthquake disaster. Ms.Yokoi, the president of XYZ said “I am looking forward to hearing from the children about the book. I would like to know that how they accept the story and how they share it with people around them.”