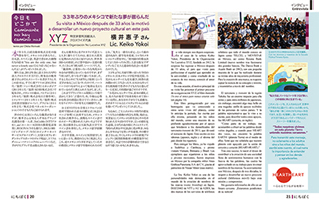 “My new dream is filled with hope in Mexico for the first time in 33 years”.

In March 2013, a picture book “You are the only one, but never a lonely one”which is translated into Spanish, English and Japanese, is donated to children in Mexico with support by Nissan Motor Co.,Ltd. The book is authored by Ms.Yokoi, the president of Nonprofit Organization XYZ and it has delivered to the children of many countries.

Ms.Yokoi is a leading woman in the field of brand naming development. After the Great East Japan Earthquake, Japanese received countless numbers of words of encouragement and supports from all over the world. Those hearty experience push herself to start the organization.

At the donation ceremony in Kyoto elementary school and Tlalpan ward office, she made a speech in fluent Spanish. She majored in Spanish in collage and went abroad to Mexico 33 years ago. During her stay in Mexico, she had a fateful meeting with her husband.

Mr. and Mrs. Yokoi returned to Mexico for the first time in 33 years. They visited Mexico-Japan academy, an orphan home and a children cancer center and spent quality time with children. At the cancer center, a little girl gave her a painting of the Popocatépetl and Iztaccihuatl mountains.

« Astronaut Hoshide gave us a message of “HEARTHEART” from the universe
As 40th anniversary of exchange between Japan and Vietnam,the picture books were donated to children in Vietnam »